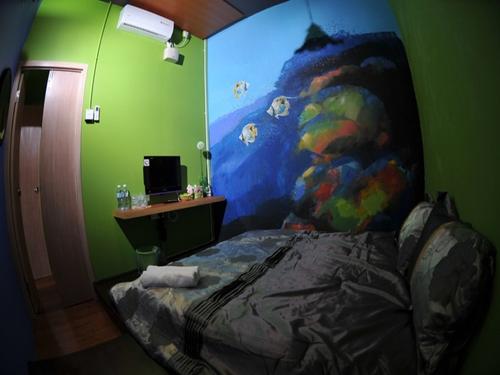 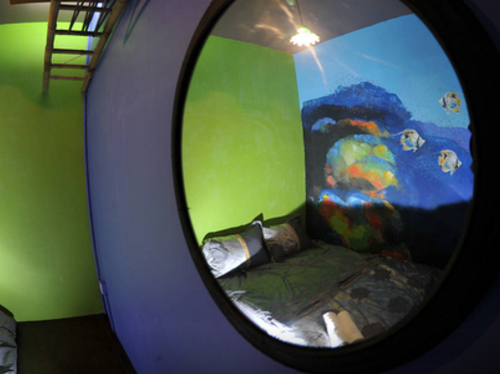 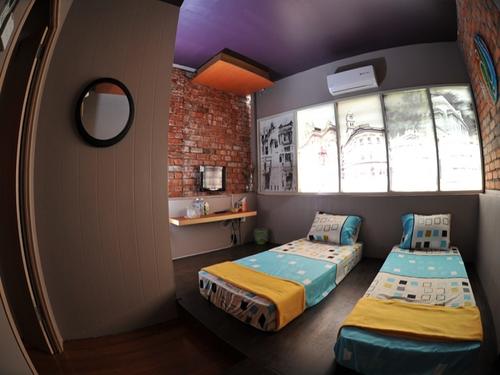 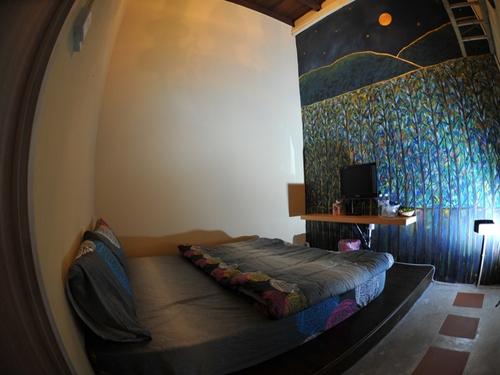 Double bedroom with a touch of corn field wall art 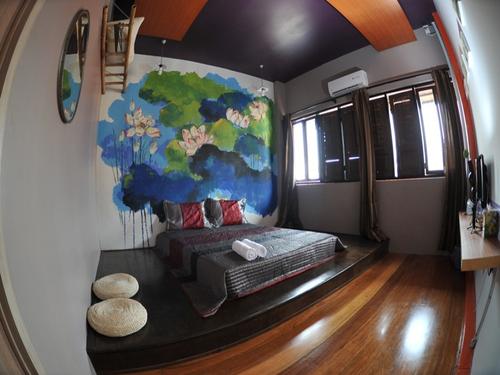 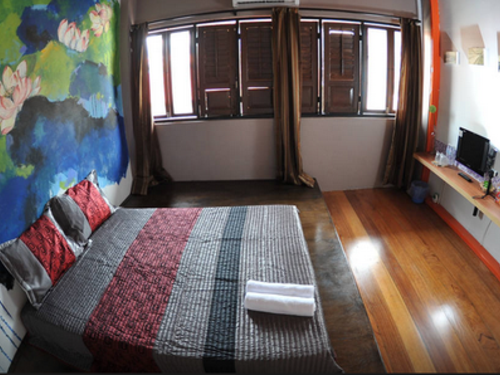 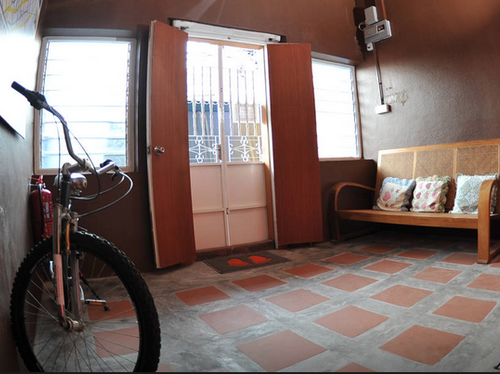 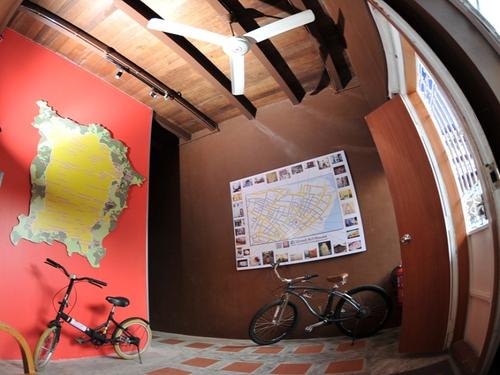 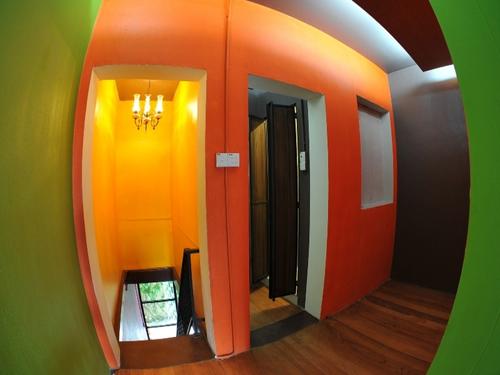 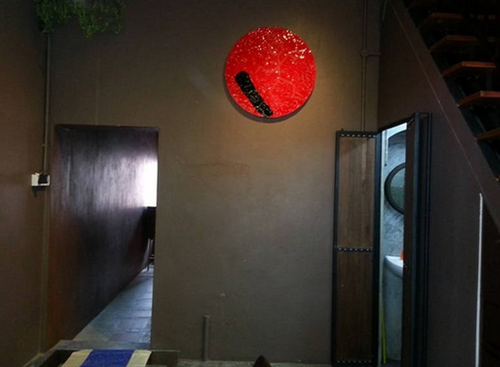 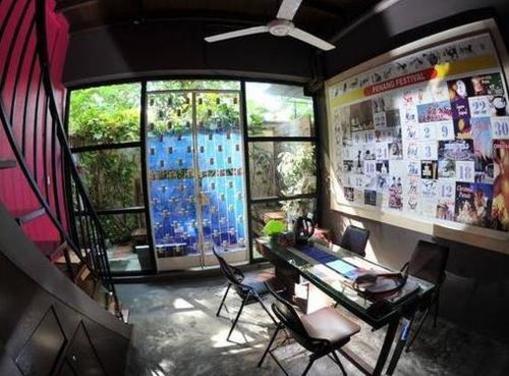 This is centre living hall of Stree Art House Homestay. 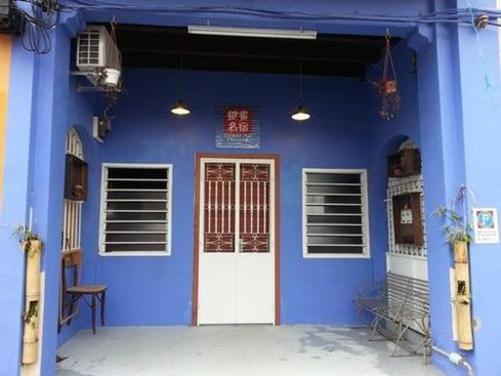 The small, double-storey Street Art HomeStay is backpacker-friendly with lots of boutique-flair - its four guestrooms share two communal bathrooms and are done up in quirky style with bare red brick walls, local artwork, quality white bedding and polished wooden floors. Each lodging unit comes equipped with air conditioning, a flat screen TV with cable programming and Wi-Fi. Being a budget hotel, hotel facilities are limited - however, they do provide free bicycle rentals.

You just need 5 minutes walk to the famous mural arts and rod arts and to nearby cafes and local attractions such as the Clan Jetties, Khoo Kongsi, Masjid Kapitan Keling etc.

Street Art House Homestay is one of the most artistic Homestay in Penang. They bring mural art to their homestay.

The Cheong Fatt Tze Mansion is located at 14 Leith Street, 10200 George Town, Penang, Malaysia. The mansion's indigo-blue outer wall makes it a very distinct building in the area. This lovely building has been around for quite a long time and its construction began in the late 19th century. The ambitious Mr. Cheong had high hopes that his mansion will be able to house nine generations of his descendants to come. In the past, the house had served as an office and a home to Mr. Cheong and his family. 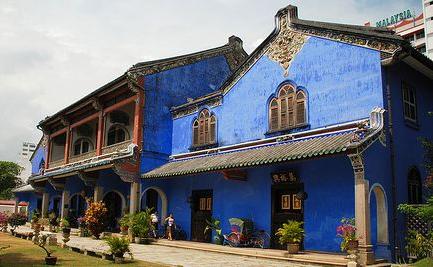 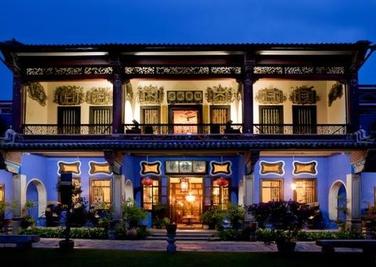 The Penang Clan Jetties form part of the Penang Heritage Trail. There used to be seven jetties until one was demolished by fire and now six remain. Billed as one of the last bastions of old Chinese settlements on the island, this waterfront society is home to houses on stilts of various Chinese clans.

Located straight down from Lebuh Chulia (beside the Kapitan Kling Mosque) at Pengkalan Weld (Weld Quay), these water villages are over a century old. Each jetty is named after a Chinese clan – the Chew Jetty is the most tourist-friendly with the most stilt-houses, the longest walkway, a temple that is worth stopping by and plenty of places for those Kodak moments. 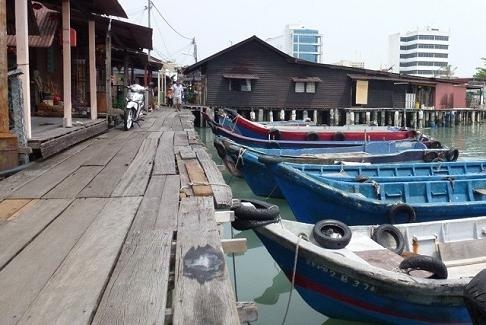 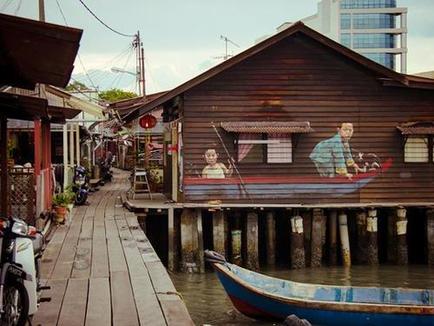 A Floating Temple, Hean Boo Thean Temple (玄母殿) touted to be the first of its kind in Malaysia, has opened its doors to the public in penang. It is a newly expanded Chinese temple at Lebuhraya Merdeka in Merdeka Park, off Weld Quay, in George Town, Penang. It is perched at water's edge within the reclamation area of Yeoh Jetty. 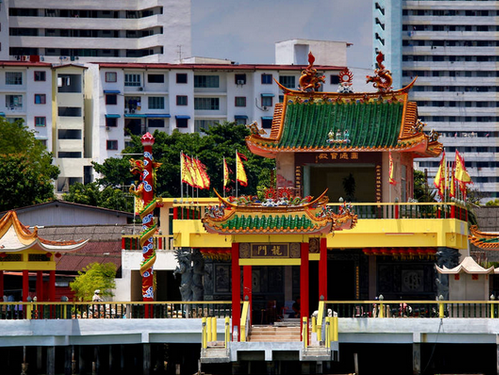 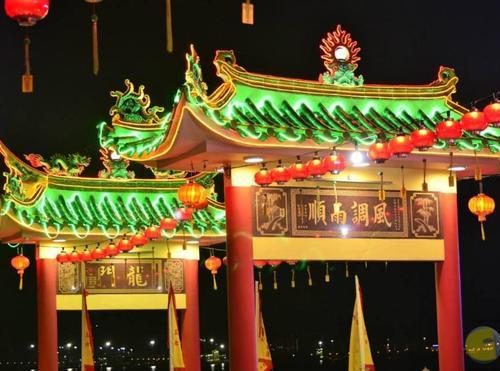 The original Hean Boo Thean Temple dates back to 1972, when it was just a humble shrine on stilts, perched over the sea. Due to its amphibious situation, it was often inundated during high tides. In May 2011, Hean Boo Thean underwent a reconstruction and expansion project that was completed in November 2012, at a cost of RM1.5 million. This included renovation and extension, and brought the total floor area of the complex to 12,000 sq ft. The temple was officiated by Penang Chief Minister Lim Guan Eng on 2 December 2012. 8 Places You Must Visit in Penang...